Passion and force and the Tsugaru Shamisen live

Shamisen is a stringed instrument that was developed by the Japanese after adding improvements to the Jabisen, the snake-skin shamisen brought over from Ryukyu, Okinawa, in the Muromachi era (14-16 AC), which was completed in the Azuchimomoyama era (17AC) after approximately 30 years.
It spread among the nation widely in the Edo era (16-19 AC) as it allows people to easily play and can be applied in wide ranges of music. Today it has become a representative national instrument and is widely known throughout the world.
A strict limitation was placed on music in the Edo era. For example the Gagaku was limited to the nobles, the Noh for samurais, the Koto for blind musicians, and the Shakuhachi was to mendicant Zen priests. Therefore, only the Shamisen was allowed to be widely played by the public.
As the Shamisen was the only available instrument for the public, the Japanese people continued to study the Shamisen for 250 years in the Edo era, improving their skills over and over to create an unbelievably elaborate and sophisticated instrument.

Stage hours/ 20:30 to 21:00 every night on the 1st floor lobby
※ Tsugaru Shamisen Live performance will be suspended from August 1 to August 7 and on December 31. 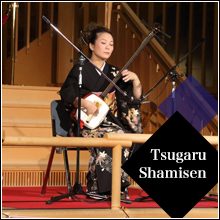